Article written by By Matt Kettmann and Photo by Paul Wellman

Submerged in a warm pool, my body is carefully flopped about, like a beach towel being shaken of sand in slow motion. My underwater mind, at first worried about when my next breath would come, forgets momentarily about the needs of my lungs. It is instead lost in a full state of utter relaxation as it floats about weightlessly, my limbs occasionally stretched, my muscles frequently massaged. Welcome to the pleasures of WRT Water Release Therapy® (WRT), a modality invented by my former Yoga Instructor Diane Feingold, who took the tenets of Watsu® (or “water shiatsu”) and developed a much deeper practice.

“I’m focusing on being fully present in mind, body, and emotion, connecting deeply with all levels of being,” explained Feingold, whose clients include both those seeking simple relaxation and others with more critical needs, such as rape victims, fibromyalgia sufferers, and folks with serious neck and back problems. “It allows me to support someone in a space where they can move in ways they cannot move on land. It helps people really integrate a lot of healing, a lot of letting go. People can free themselves up from things that might be in the way of living fully in their life.” 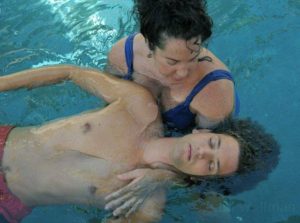 Working mostly in a specially designed chemical-free, salt and mineral, in-ground backyard pool in a convenient Santa Barbara neighborhood, Feingold offers sessions lasting from one hour to three days, and also trains others who want to incorporate WRT into their practices. Citing patients who cry the entire session because of being held close and others who make psychological breakthroughs due to the submersions, Feingold—whose body frequently “jolts” during sessions in order to help clients’ unwanted energy release into the water— her work is “extremely transformational.”

When my session ended, the world certainly seemed brighter, and I remarked that the experience was like slipping into another world. Laughed Feingold, “That’s the world I live in.” I was jealous.

for full Article in Independent: http://www.independent.com/news/2010/oct/07/getting-well-newer-ways/